Santa Lucia de Tirajana is a picturesque village which is located in the southeast part of Gran Canaria. It is south of Las Palmas and Teide and northeast of Puerto Rico. “Santa Lucia” means Saint Lucy. There are just over 50,000 residents there today. This pretty part of the island is situated in the mountains and valleys and there are beautiful, lush forests. The abundance of palm trees and whitewashed houses are really pretty and you can get some great photos if you visit.

Not many people lived in this village in the 1800s, which is why Doctoral, Vecindario and Sardina are included in the confines of the municipality. When tomato-growing was introduced to the coastal regions and tourism came to the region in the 1960s, a lot of people decided to relocate to this quieter, cheaper region.

You can pay a visit to the Iglesia de Santa Lucia, a church, on top of the hill. This was constructed in 1898, on the site of an older chapel. You might think the church dome looks a bit like a mosque from a distance. You can also visit the Museo del Castillo de la Fortaleza, a small but interesting museum featuring locally-discovered Guanche agricultural tools, skeletons, leather goods and other artefacts.

The Fortaleza Grande, a fortress-shaped rock formation, can be found nearby. This is the location of one of the Guanches’ last stands. Supposedly a lot of Guanches refused to convert to Christianity in 1483 and threw themselves off these rocks to kill themselves instead. There is a ceremony on the plateau behind the Fortaleza Grande to commemorate this historical event.

Drive a bit further along the coast and you will come to Poza Izquierdo, which is where some of the World Windsurfing Championship is held. You can also find the Maritime Interpretation Centre there. You can find out more about Dia de Santa Lucia here: Dia de Santa Lucia (Saint Lucia Day) 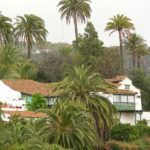