If white Caribbean sand and turquoise sea sounds like your idea of heaven, you will like Anfi del Mar. Although this is primarily a timeshare resort, the beach is not private and anybody can visit. I’ve been there numerous times! Anfi beach is situated near Patalavaca and a bus from Puerto Rico only takes 15 minutes or so to get there. You can also get a taxi from Puerto Rico.

When the weather at Anfi del Mar is good (and that’s most of the time), it’s one of the prettiest beaches on the island. If you prefer natural beaches, you might like to check out Gui Gui beach or the Maspalomas dunes, because the sand at Anfi is imported from the Caribbean.

Personally I wouldn’t go to Anfi at the weekend when it’s full of noisy locals. If you prefer your beaches a little less rowdy and not so packed, head to Anfi del Mar on a weekday. There are a few bars and restaurants behind the beach but they’re more expensive that those behind, say, Arguineguin, San Agustin or Puerto Rico beach, just because Anfi is a resort.

I’ve seen one of the suites there (we had some family over to stay) and the rooms are nice – their suite even had a dishwasher and washing machine!

A last word about the Anfi del Mar timeshare touts… having lived in the Canaries for over 10 years I have a lot of experience with the timeshare touts who plague the resorts, both being hassled by them and watching other people get hassled.

They will stop you in the street and try to get you to a timeshare presentation, promising various “gifts” if you go (bottle of local whisky, 200 cigarettes, dolphin trip tickets etc) but I’ve heard from hundreds of tourists over the years that sitting through hours of a boring presentation is not worth the “gifts” or the hassle (and do you really want to waste a whole day of your holiday?)

So my advice is to forget the timeshare touts and just get the bus (or taxi) to Anfi del Mar. It’s a public beach and it’s a nice way to spend at least one day of your holiday. If you don’t want to pay over the odds for snacks, drinks and reading material, take your own. 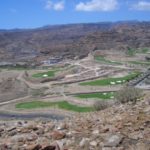