Palmitos Park, most of which was destroyed in the Gran Canaria fires of last year, has been rebuilt and is now better than ever! Palmitos Park is a wildlife park containing more than 200 species of bird including hornbills, peacocks, toucans and macaws, a butterfly house, an orchid house and a cacti garden.

You can watch bird of prey shows, parrot shows and see plenty of tropical fish in the aquarium. The butterfly house is the biggest in Europe and there are thousands of colourful, exotic butterflies flying free in the enclosure.

Palmitos Park is open daily from 9.30am until 6pm and you can get a taxi from Playa del Inglés or the bus from Puerto Rico, since it is located just behind Maspalomas. It’s a great place to spend the whole day and is ideals for singles, couples or families.

7 Things to Do in Maspalomas 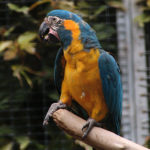 Day Trip to Tenerife and Loro Park from Gran Canaria

Is Gran Canaria Busy in December