How to Get from Gran Canaria Airport to Puerto Rico

If you don’t mind spending 60 euros you can get a taxi from the airport to Puerto Rico but most people would rather take public transport, since the bus costs about 6 euros and takes around an hour.

I once had to take a cab to Tauro (behind Puerto Rico) because my flight was delayed and I arrived at 1 o’clock in the morning which is well after the time the buses stop running and it was 60 euros. Ouch!

If you want to get the bus, the bus stop is the other side of the main road from the airport (go through the tunnel to get over) and you will need the number 66 to get to Faro Maspalomas (the last stop) and then the 33 or 39 to go the rest of the way.

How to Get to Your Hotel from Puerto Rico Bus Station

The bus station in Puerto Rico is near a taxi stand so if your hotel isn’t in the vicinity of the main shopping centre (check before you go) you can get a cab. Remember a lot of hotels in Puerto Rico are on the top of the hill so you won’t want to lug suitcases up the steep hill in 30 degree heat!

Some of the bus drivers speak English and almost all of them speak a tiny bit. Enough to answer you about when the next bus is due or where to catch your next bus. There are timetables on each bus stop anyway. You can find out more here: http://www.globalsu.net – this site is the official Gran Canaria bus website. It’s in Spanish but you just have to choose your departure point and destination from the drop-down menus and click “ir” for the info to come up. 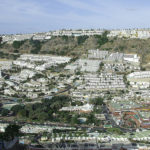 7 Things to Do in Puerto Rico, Gran Canaria